The Gregory Walkers: with Laoise O’Brien (recorders), Eamon Sweeney (baroque guitar), Francesco Turrisi (percussion) and me on the viol. This is a group playing early dance tunes, ground basses and melodies Irish and otherwise from the 17th century and before. The line-up is akin to a jazz band and the group has that sort of flexible and improvisatory vibe. Which is just what the music requires! 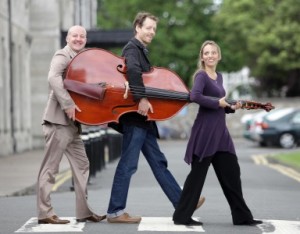 The Far Flung Trio: Our programmes feature an informal mix of Baroque, South American, Klezmer music, movie classics and more, introduced and performed by a trio of violin, accordion and double bass. With leader of the Irish Chamber Orchestra violinist Katherine Hunka and the extraordinary accordion player Dermot Dunne, I’m the sideman and they even let me sing! We have performed all over the country and recently recorded a live album in Waterford’s City Hall. Appealing to all ages, a particular favourite is our arrangement of Peter and the Wolf. Brendan Flynn of Clifden Arts Festival described us as “crazy and beautiful”.

A complementary format to the standard string quartet that offers an alternative tonal palette and range. Somewhat bizarrely, there was almost no repertoire for this grouping until I started commissioning some; and thanks to the enthusiastic engagement of many Irish composers we already boast a considerable library. Sebastian Adams wrote us our first piece which we premiered at Kaleidoscope Night on the 6th of February 2013.

We were KaleidoscopeNight’s ensemble-in-residence in 2014 and resident tutors for Music Generation Carlow’s Outstanding Young Musicians 2014-2015.

Admitting that even painstakingly accurate historical recreation cannot bring us back in time, we will seek to bring period performance to the contemporary audience in a different way: what if a seventeenth-century trio were parachuted into the 21st-century? How would they react to our current musical environment? Given the predilection for improvisation and spontaneity in that era, they would be unlikely to stay strictly within their familiar modes. So we employ the textures and sonorities of our historical instruments in repertoire ranging from the very ancient to the brand new. For Spring 2016 we were resident artists at the LexIcon, which is the splendid public library building in DunLaoghaire, South County Dublin.