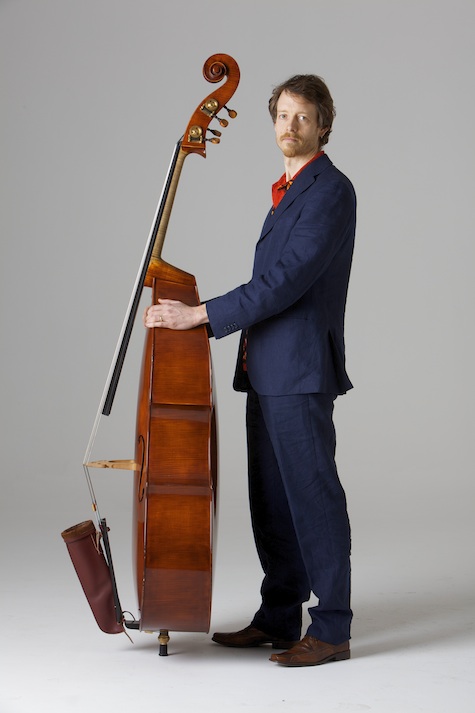 I play a truly beautiful double-bass by Christian Laborie, which was made for me in 2007. Smaller-bodied than some (particularly in the shoulders) it could be termed a “chamber-bass”. I had previously been playing a large symphonic bass with low C-extension but it was not the voice I had in my head. After much searching and meetings with bassists and basses I visited Christain in Grenoble and witnessed the gestation of my bass over the next year. It is designed on a famous ergonomic pattern by Charles Quenoil but with some modifications, most notably a higher arching front and back which adds to its size and depth of tone.

What was the voice in my head? Well, I play mostly in small groups where the instruments are all required to wear many hats and their roles overlap. A very large orchestra will require a lot of fundamental from the basses, but rarely are they asked to step outside that typecast role. I needed an instrument that could converse with the other string instruments, which meant that it needed more brightness and clarity, more colours. Of course there is a trade-off in rumble-factor, but it is the voice I was seeking and fits like a glove.

The bows that I use are by revolutionary Parisian archetier Boris Fritsch; they are unlike any other bows I have encountered and really now are more crucial to my setup than the bass. That is to say, even when I have to play on a dubious rental bass while touring (sometimes it can’t be avoided) I no longer dread the situation as long as I have my bow. 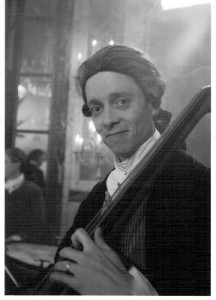 Another noteworthy bass I play is a 19th-century Bohemian 3-stringer. I use this for playing Baroque and earlier music, strung naturally with plain gut. The tuning I use is G1-D2-G2 which is interesting to get your head round but not as much trouble as you might think: the lower G-string is quite intuitive because one is familiar with note positions on the (top) G-string. An F-string is much more trouble! (see my violone page) The GDG tuning is well-documented and sounds wonderfully resonant. Dragonetti’s A1-D2-G2 is a handier option for fingering patterns but loses some open resonance and a useful fundamental G. This bass is of a simple and lightweight structure that resembles instruments in countless paintings, and was a pretty unchanged pattern for centuries. Bows I use are a huge Dragonetti-style when playing with trumpets and drums and a light overhand one for small string groupings.